Lovecraft Illustrated Volume 6 - At the Mountains of Madness

This story is one of my favorites. Lovecraft does what he does best in At the Mountains of Madness; he tells us a story through tantalizing second-hand hints and messages sent by wire, by footprints and glyphs and traces of mayhem, of things at first fearsome and strange, but increasingly deserving of our sympathy. A story of the Old Ones who built a nigh-endless city and whose civilization spanned ages. And our own place in the story and the cosmos which . . . but youll see. Cozy up in a warm spot and make the journey to Antarctica where you may discover a world of which our world is only a part. A world full of that which will make men mad if they should look upon it.

This is LOVECRAFT ILLUSTRATED volume 6, & is one of ye finest in this series of Lovecraft's Work illustrated by Pete Von Sholly. Artistically, it contains some of the artist's finest work, beautifully reproduced. The end-papers, shewing in pale silhouette a confrontation between human and Old One, is remarkably fine, and a majority of the artwork--some publish'd in two-page centerfold-style, is presented in subdued tones of sepia, blue and green; although there are other various pieces that shew Von Sholly's expertise when working with vivid colour. S. T.'s short Introduction is interesting; but the fascinating aspect of this edition is that it includes the story "In Amundsen's Tent", from ye January 1928 issue of WEIRD TALES, where H. P. Lovecraft read it. The story, by John Martin Leahy, is now thought to have influenced/inspired ye writing of "At the Mountains of Madness". Following the text of Lovecraft's novella, we have "Frozen Fears" by Pete Von Sholly, where he reflects on Leahy's tale and tells of introducing it to both S. T. Joshi and Robert M. Price. This is followed by the complete text of "In Amundsen's Tent," follow'd by essays on ye story by Joshi and Price.

Lovecraft Illustrated Volume 6 - At the Mountains of Madness 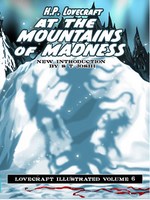