From the hills the fairies whisper to lone strangers, "come join the dance". Watching from beneath the waves are the Merrow, the dwellers of the deep. Strange noises and half-heard screams ring at night from the cellars of the towns and cillages. The unwary go missing in the wilds, the locals say "Pooka" and shake their heads. Fires are lit on the mountainsides and bones are cast into the flames; a young woman sits in a trance as ectoplasm oozes from her mouth, and she speaks of times-past in a voice that is not her own.

All these things and more are waiting on this Celtic Isla. This is a land of roaring seas, deep lakes, green pastures, barren bogs, and heather-topper mountains.

Mysteries of Ireland is a source book for the Call of Cthulhu roleplaying game. It is a guide for playing games and running scenarios in 1920s Ireland.

This book contains information on life in Ireland during this period and includes Irish Myths, Legends and Superstitions, the Occult, and the Mythos. There is detailed information for Dublin and Belfast, two new investigator occupations: Tinkers and WWI Veterans, several new creatures, and three new scenarios. 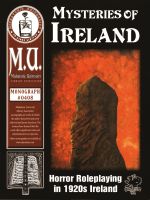