ARE YOU CLEARED FOR THIS?

For eighty years your organization has fought to protect humanity by unearthing evils older than the world. You violated every law to save people who'll never know you exist. You took down fanatics who worshipped horror itself. You dug up truths that the powers of government and magic tried to conceal.

You're about to wish you'd left well enough alone.

Delta Green: Eyes Only digs deep into the worm-ridden heart of modern power. Uncover its secrets and you'll see why people kill to keep them hidden. MACHINATIONS OF THE MI-GO explores the history, goals and science of the Fungi from Yuggoth, included the plot that shaped American government for decades. The New York occult underground explodes with THE FATE, an in-depth look at Stephen Alziz and his servants and enemies, including new Cthulhu Mythos tomes and a guide to playing characters in the Network. PROJECT RAINBOW brings a staple of conspiracy fiction, the Philadelphia Experiment, seamlessly into the Mythos- stealth technology meets the Tillinghast Resonator with nightmarish results.

Plus: TRADECRAFT, detailing Green Boxes, communications security, hacking, interrogation and the emotional toll of murder; POLICING MILLENIAL NYC, listing federal law enforcement agencies and facilities in the New York area; A NIGHT ON OWLSHEAD MOUNTAIN, an adventure that pits investigators against the deadly aftereffects of alien activity; HOLY WAR, in which Delta Green attempts to unravel New Yorks most dangerous occult conspiracy in the months after 9/11/01; and ARTIFACT ZERO, a mind-blowing time-travel scenario in which the agents put more than their lives and souls at risk. 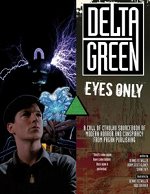