Three multi-session 1920s scenarios (one in two parts) will challenge your investigators as they encounter the forces of the mythos. Pre-Gen characters are provided, but need not be used, for all but the final scenario.

The Devil is in the Details-- wherein the investigators learn that small mistakes can become bigger ones and the only thing more dangerous than too much knowledge is too little. This scenario takes place during winter, at an old deserted mansion in the Catskill Mountains of New York State.

Keys of Madness: Part One, Key West-- wherein investigators journey to Key West to meet with a discredited archeologist who claims to have made an amazing discovery. The first half of this two-part scenario takes place in glamorous Key West, one of the riches cities in America at the time, in the state of Florida.

Borne Into Darkness-- Wherein investigators seek to solve the mystery of a series of vanishings from a roadside motel and find that small towns often hide the largest terrors. This short investigation completes the collection and takes place in the small town of Litchfield, New Hampshire and serves well as a Drop In adventure into an existing campaign. 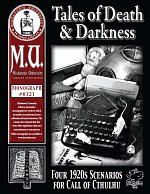