Down these mean streets no man should go...

Cyclopean skyscrapers, bizarre cults, strange foreigners and eerie alleyways  the city of New York stands on the threshold between the modern age and the Mythos. No-one in the NYPD speaks of it, but everyone knows that certain neighborhoods are to be left alone and that there are worse things than criminals in the shadows. Only the foolhardy or the desperate follow the trail down these haunted streets.

Four labyrinthine and spine-chilling mysteries for your Trail of Cthulhu investigators!

The Kidnapping: An infant has been snatched from the cradle. Can the investigators track down the kidnappers before the parents are forced to pay the ransom?

The Book: Two men die under similar circumstances within a day of each other, victims of a serial killer that stalks New York. As the investigators delve into the mystery, they discover the perils of learning too much

The Wreck: The tramp steamer Star of Mauritius is discovered drifting in the harbour. Her crew are all dead or missing. What secrets lie within her rusting hull?

Return to Red Hook: Thomas Malone led the police into the slums of Red Hook ten years ago, and dozens of officers died there. Now, the horror at Red Hook has returned, and once again New Yorks finest must risk their lives amid the crumbling bricks tenements.

The Investigators are law enforcement agents and their civilian consultants, answerable for their actions, but will the full force of the law be enough to stem the tide of the Mythos? 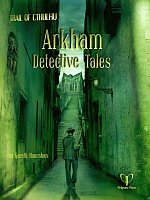