Welcome to America at the end of the millennium. Do you know who is pulling the strings?

Delta Green knows. Things from beyond space and time that lurk and titter in the shadows, the slow rot at the core of humanity, the dark stars that whirl madly above - these are the true masters of the world. Delta Green has been fighting since the 1928 Raid on Innsmouth, and the fight still rages on.

This book is your weapon and your guide.

The largest Call of Cthulhu sourcebook ever.

Inside you'll find a secret history of the 20th century and the movers and shakers who are players in the game: Delta Green, the outlaw conspiracy working inside the U.S. government to fight the darkness; Majestic-12, the clandestine agency that cuts deals with aliens and reports to no one; SaucerWatch, a UFO study group closer to the truth than they know; the Harotechnia, immortal Nazis who serve a risen Hitler; and the Fate, an occult syndicate that knows where the bodies are buried.

 profiles of thirty-six real-world intelligence and law-enforcement agencies, with character templates for each

 a look at Mi-Go biology, philosophy, and operations

 analysis of the Cthulhu Mythos in the modern day

 a factual history of the U.S. intelligence and law-enforcement community

The book that started it all! Five years in the making, DELTA GREEN won the Origins Award for Best Roleplaying Game Supplement of 1997 and has received unanimous critical praise.

Delta Green tells the story of the Cthulhu Mythos in the modern age. Conspiracies abound, and this is one of the deadliest: Delta Green is a handful of men and women who use the resources of the government to fight a secret, illegal--some would say treasonous--war against monstrosities which threaten their world.

This is a massive 1990s sourcebook dealing with government conspiracies, alien activity, undead Nazis, and much more. 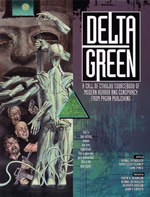