The Necronomicon is said to contain the lost knowledge of the Elder Gods, the ancient lords of darkness that held dominion over the Earth aeons ago. Believed to hold the key to opening forgotten gateways between worlds, the text prophesies the return of the Great Old Ones and contains forbidden rituals of summoning that will bring about their resurrection.

Now, for the first time ever, the Necronomicon is set to music with this dark symphony by Nox Arcana. This epic concept album based on H.P. Lovecraft's legendary book of shadows features a mixture of exotic, dark fantasy themes, ominous orchestrations, Gothic choirs, Egyptian and Middle-Eastern melodies, eerie voices and otherworldly chants. This musical grimoire is a spellbinding tribute to the Cthulhu Mythosa powerful and sinister soundtrack to evoke your darkest nightmare. For a truly terrifying Halloween. 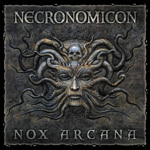