From Death Valley to the Ohio serpent mounds to a cultish industrial plant, the Agents have pursued the secrets of long-dead inventor Arthur Hunt and his legacy of unnatural power and danger. Now they face the ultimate revelations. A culture all but extinct, fallen before humanity learned to record its history, struggles to rise and conquer from the distant past. And a force beyond space-time itself looks on, turning the Agents' desperate struggles and sacrifices to its own inconceivable ends. If the Agents survive, it may only be to see a world changed and traumatized even more drastically than themselves. 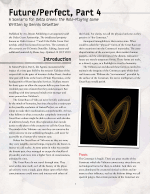