While the World War Cthulhu: Cold War core book provides information about the intelligence agencies of the United States, Canada, Australia and New Zealand, its focus is largely on British intelligence. Of course, the Cold War and the events of the 1970s were overwhelmingly shaped by the actions of the USA and the Soviet Union, so the United States deserve some special attention. 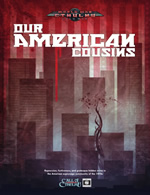