Plotting, scheming, working, fighting: intelligence operations in the dead corners and unplumbed depths of the 1970s

The line between spy and criminal is often so thin as to be invisible. A good spy needs to lie convincingly, break into places he or she doesnt belong, forge documents, steal secrets, blackmail potential informants and, when all else fails, kill with ruthless efficiency. Above all, they need to evade capture while doing all these things.

Section 46 operates even further in the shadows than most intelligence organisations. Their activities are unsanctioned, their methods brutal and their enemies sometimes inhuman.

The Section 46 Operations Manual is a handbook for World War Cthulhu: Cold War players, designed to teach them how best to succeed and survive in this murky world of 1970s espionage, or at least how to delay the inevitable for as long as possible. 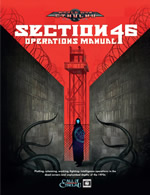