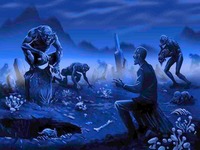 While not one of HPLs most popular tales, The Dream-Quest of Unknown Kadath is bursting with scenes and creatures that simply beg for artistic expression.

Although its HPLs only total fantasy epic, the inclusion of Richard Upton Pickman (in a kind of sequel to Pickmans Model), the ubiquitous Nyarlathotep, and the various name and place references tie the story to Lovecrafts other major fiction and pull it away from his Dunsanian stories. I have drawn Randolph Carter, our hero, as Lovecraft since the story is so auto-biographical, heavily incorporating his love of antiquarian architecture, cats and of course the past.

Of all the authors work, I find this one to have a very satisfying and happy ending; something we dont often get with Lovecraft. This was the first story I illustrated and Im delighted that PS is using it as the springboard for their new Pulps Library.

(...) Because of ye novel's length (43,100 words), this edition in the PS Publishing LOVECRAFT ILLUSTRATED series contain just the wee novel, plus a new Introduction by S. T. Joshi, and a wee rambling essay by artist Pete Von Sholly on his love of Lovecraft."Dream-Quest" is, as far as I understand, a first draft that was never revised by Lovecraft; and it was followed by the writing of THE CASE OF CHARLES DEXTER WARD, which is also a first draft, although Lovecraft revised the text thoroughly as he wrote it out. Writes S. T. in his Introduction: "In many ways, the DREAM-QUEST and CHARLES DEXTER WARD are mirror images of the same basic idea--the idea that 'you can come home again.'" In this work, we encounter one of Lovecraft's recurring characters, Randolph Carter, whom some say is Lovecraft's fictional "portrayal" of himself. Von Sholly seems to have picked up on this, for in some of his paintings Carter does indeed resemble his creator.

The illustrations are superb, really magnificent. On page 43 we have what is ye finest depiction of a night-gaunt that I have ever seen, a really INKY fiend! Pages 50 and 51 are taken up with a spread depicting this line from ye novel: "There, on a tombstone of 1768...sat the ghoul which was once the artist Richard Upton Pickman." This is perhaps my favourite scene in the novella, and Pete's rendition of it is quite effectively portray'd in hues of purple, blue, and black. The chart of these illustrated editions is in turning the pages as one reads Lovecraft work and suddenly coming upon a vivid illustration of ye scene just mentally devour'd. 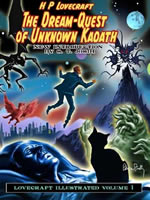