Kontamination is a standalone adventure for both hardened Achtung! Cthulhu veterans and newcomers alike, set in late 1944 as the Allies press their advantage and make for the German border.

Join a band of unusual heroes behind enemy lines as they attempt to get to the bottom of a nefarious plot to unleash a wave of madness and mayhem on the unsuspecting forces caught up in the Ardennes Offensive. 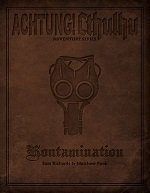