Loïc Muzy is Staff Artist at Chaosium. A professional illustrator in France for more than 10 years, Loïc works mainly in the field of role-playing games. His award-winning work is well known from the English and French editions of Call of Cthulhu, and can be seen in other RPG lines including Les Lames du Cardinal. The Lovecraft Mythos is a red thread in Loïc's career; to date, he has produced more than 1000 illustrations for this universe  but he likes to experiment with new settings too, such as RuneQuest's world of Glorantha.

In addition to role-playing games, Loïc has also illustrated board games, video games, and miniatures games with a broad range of themes: horrific, post-apocalyptic, ancient Greece, and even a car rally! Passionate about fantasy, he likes to create visions of worlds through his illustrations and also in his hobby, painting wargame miniatures.

And yes, he knows that the ï of his first name makes it unpronounceable for some. 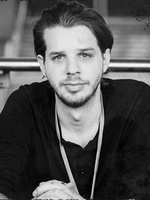